Because the night... belongs to training 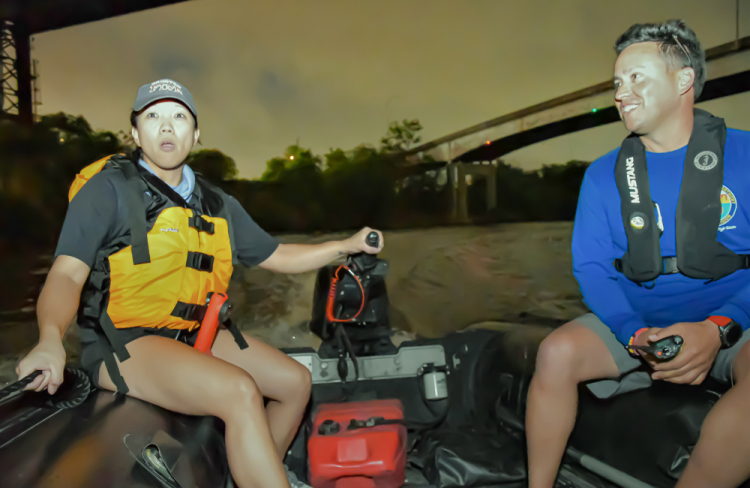 HFD firefighter Kristin Lowe, left, drives a rescue boat along Buffalo Bayou looking to avoid objects in the water while Marine Team Coordinator Beau Moreno looks on. This is part of the High- Water Rescue Fleet Night training as they prepare for hurricane season. Photo by Pete Mayes

Following the devastation of Hurricane Harvey in 2017, the Houston Fire Department has done everything within its power to to be even better prepared for the next major hurricane. Expanding its high-water rescue fleet was one of the many ways it did.

The department’s High-Water Rescue Team trains on the waters of Buffalo Bayou, learning to simulate navigating the flooded streets of Houston as they search for those who need help. The training became more challenging as they conducted simulations at night in early May to prepare for the oncoming hurricane season.

For Kristin Lowe, a Houston firefighter assigned to Station 32, it was an awesome experience. “It was my first time ever doing night training. You can’t see a thing at night!” she exclaimed.

“It’s always been a daytime training event. We’ve taken more of a ‘crawl, walk and run’ approach, so training at night is actually considered the run phase,” he said.  “Now that they’ve done it, they’re like, ‘WOW, I really cannot see anything, and we really have to slow down.”

The “crawl” stage of highwater rescue training starts at Lake Houston where firefighters learn how to operate the boats, Moreno said. The “walk” phase occurs when they go out on to Buffalo Bayou and conduct daytime training in a specified area of the waterways.

The department expanded its fleet following the devastation resulting from Harvey in 2017. Moreno said approximately 17 fire stations have a mix of boats — 19 flat-bottom boats and 11 Zodiac inflatables — that are used to conduct search and rescue operations during hurricanes or flooding in the Greater Houston area.

The team hit a lull in training this past year during the pandemic and were redeployed to the Southeast Texas Regional Advisory Council delivering Personal Protection Equipment to 26 counties in Southeast Texas.

“It felt like we were driving gold around,” Moreno said, jokingly.

“We encouraged everyone that we were picking up to wear a mask. And if they didn’t have a mask, we provided them one,” he said.

With about 2,300 miles of waterway through and around Houston, including the Buffalo Bayou and creeks, Moreno said Houston has a lot of experience dealing with flooding. He said his team knows how to chase and deal with the water, both in their waterways and on their streets when it occurs. “We can flood on a sunny day,” he said.

Cruising down Buffalo Bayou at night takes on an otherworldly aura. Lowe likened it to the Netflix series, “Stranger Things,” saying her mind played a few tricks on her, as she thought about the alligators, gars and snakes that call the bayou home.

“It’s similar to seeing Houston from the upside down, but not nearly as scary and way more fascinating,” she observed.

Starting at the Turkey Bend area of the bayou, the team traversed several miles of waterway, including into the outer edges of the Houston Ship Channel and along downtown Houston and into Memorial Park. The sights and sounds of the waterway at night came alive, especially near the Waugh Bridge Bat Colony.

Moreno said night training is critical so team members understand that operating in the dark is a different animal.

“If you think about the storms that came in, Harvey came in at night. We’re not looking for logs, we’re looking for cars, missing manhole covers. … Those are things we need to think about when we’re operating in the street like that,” he said.

Lowe and her fellow firefighter Cody Rogers both admitted they had a hard time seeing at night at first, but then their eyes adjusted.

“I could not see too far ahead which meant I had to slow down to avoid any debris,” Lowe said. “There are more man-made obstacles — bridges, debris, old construction with urban environments — as opposed to more rural surroundings where the most you need to be aware of is a random stump and the dock you launched from.”

Rogers said the main difference in daytime and nighttime training was the visibility, but with all the light pollution in the city it wasn’t difficult to see obstacles in the water. Still, operating at night is challenging, he said.

“It’s not easy to do and they need to be patient when we are responding in weather conditions,” he said.

Lowe said she appreciates the work Moreno and his team have done to ensure that all stations with evacuation and rescue equipment receive the training and preparation to deploy when the next flood hits Houston.

“I believe the men and women of the department are continually sharpening the blade with training like night training with the evac and rescue boats,” she said.