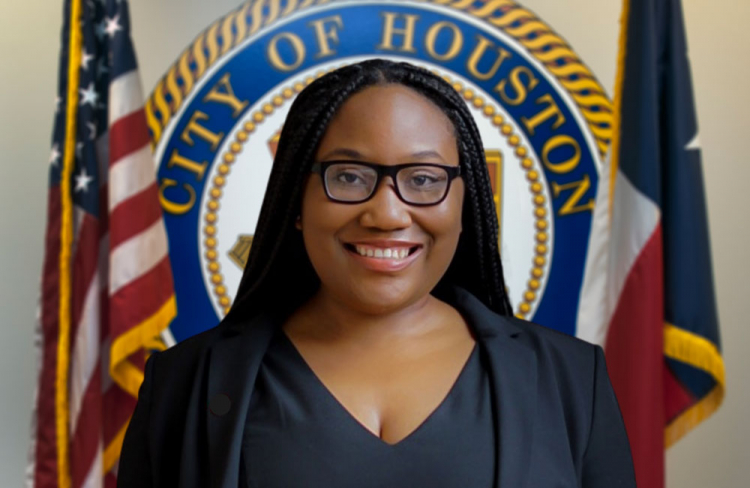 For people with limited means, getting access to personal protective equipment was challenging during the early months of the COVID-19 pandemic. It was a scary reality that Cherrelle Duncan worked to address through her role with the city and volunteer efforts.

“PPE, food and water distributions were critical for District F, as many constituents were vulnerable and in need,” said Duncan, chief of staff for Houston City Councilwoman Tiffany D. Thomas.

Duncan said Thomas’ office partnered with community organizations to provide resources to serve more than 300 families during food and water distribution events held over the past year.

Despite the long hours she spent overseeing crisis management for District F, Duncan said she felt the need to help as many people as she could.

“I worked with my family’s nonprofit to collect and distribute PPE, food and water care packages to 200 homeless individuals in Lafayette and downtown Houston,” Duncan said. “Each distribution was important, as it allowed for protection against COVID-19 and provided essential food and water, even if just for one additional night, for children, adults, and families.”

For Duncan, public service and volunteerism are one in the same. Her passion for giving back earned her a City of Houston Bravo Award in May.

According to Thomas, Duncan has been an invaluable member of her council team.

“Since her employment with the City of Houston and the District F team, she has demonstrated excellence in execution, authenticity in relationship building, and integrity regarding the demanding issues we tackle as public servants,” Thomas said.

“My goal in life is to improve the well-being of those in need,” Duncan said.

Duncan said her journey of public service started early on, with her late father and mother instilling in her the value and purpose of giving back at a young age.

“As a child, you would likely find me in church raising money for our Sunday school class or setting up food and clothing drives,” she said. “As a young adult, this call to service grew as I organized and led volunteer projects in response to Hurricane Katrina, as well as general community service in the high school and collegiate branch of Kiwanis International.”

Duncan carries those values instilled by her late parents into her daily role with the city and ongoing volunteer efforts.

“I typically gravitate towards volunteer organizations that take a holistic approach to individuals and families success,” she said. “Organizations that speak to me and are representative of the communities that I am a part of.”

Duncan also volunteers at the Houston Area Urban League, where she helps with programming for the homeless community, youth, and fundraising. HAUL is a nonprofit that aims to enable African Americans and other minorities to secure economic self-reliance, parity, power and civil rights.

Over the past six years, Duncan has served HAUL as the vice president, treasurer and fund development chair. She currently serves as a member of the Leadership, Training, and Development Committee for the National Urban League Young Professionals.

“The Houston Area Urban League is one of the first service organizations I volunteered with when I moved to Houston,” Duncan said. “As much as I have given to HAUL, they have given back to me by way of their programming, professional development and community.”

Through her work with District F, Duncan got involved with Heads Up Houston and now volunteers to help the nonprofit mobilize book donations for the organization’s after-school and summer literacy program.

After graduating with a master’s degree in Public Service and Administration from Texas A&M’s George Bush School of Government & Public Service, she began volunteering with the Association of Former Students of Texas A&M. Duncan helps with recruitment efforts, fundraising, and connecting students with resources and serves as a guest speaker.

“Giving back to the students by way of education and professional development is important to me, especially as they pursue their careers,” she said.

“When people ask about my career choice, I often struggle or pause because public service is all I know,” Duncan said. “Volunteering and community work are the foundation of my life.”