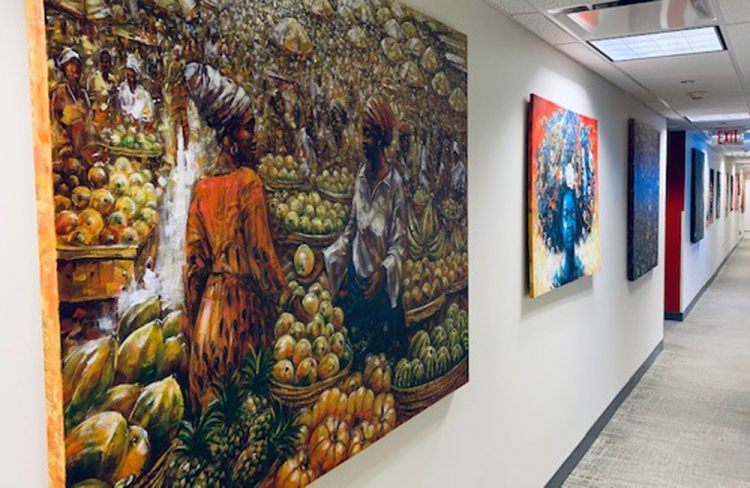 Art by Houston artist Owolabi Aydele and others line the walls of the HTV Studios as part of the ‘Konnect’ pop-up art exhibit. HTV and the Harambee Art Gallery are collaborating on the exhibit. Photo courtesy of HTV

The art and photography adorning the hallway walls at Houston Television weren’t just meant to spruce up the blank spaces. Inside the studios of the public, education and government channel at City Hall, they served a greater purpose of introducing art and governance.

HTV and the Harambee Art Gallery hosted ‘Konnect’, a pop-up art gallery or temporary exhibition that runs for a day or a month or more in non-traditional spaces to highlight the works of new and exciting local artists. 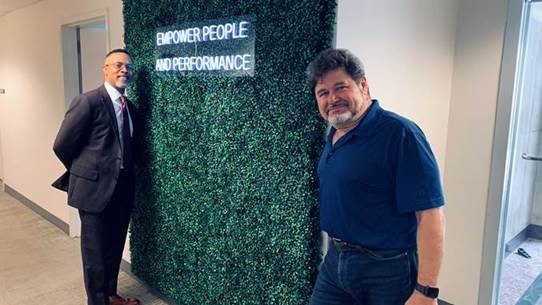 “The combined Harambee/HTV Art Gallery presentation for 2022 … helps to highlight the amazing diversity in the city of Houston by showcasing artists of various ethnicities and age groups,” HTV Director Ted Irving explained. “This is the seventh year of the gallery partnership and HTV is the official city medium that showcases our local government in action.”

For Kenisha Ken-Coleman, general manager for the Harambee Art Gallery who wrote the initial proposal for the exhibit, the pop-up gallery has a special meaning.

“To see it go from then to now, with all of the different artists who’ve come through and seeing what’s going on in the world right now and how we can represent the Black community in all of these different aspects, it’s exciting to see and share,” she said.

According to its website, the ‘Konnect’ exhibit is a showcase inspired by the African Diaspora-expressing the bond of human experience.” It’s one of four exhibits the Harambee Art Gallery will sponsor at City Hall this year, Coleman said. The first exhibit ends Jan. 22.

“The first thing we had to do was connect the African Diaspora. I felt that we had a responsibility to do so. We can’t go forward without checking ourselves,” Harambee Art Gallery Executive Director Charles Washington said.

Walking through the hallways, the colorful artwork displayed by artists Owolabi Aydele and Queen Cora Coleman demonstrates a wistful, yet lysergic quality, while the work of photographer Drew Evans (who goes by the moniker “Risky Cereal”) depicts Houston’s homeless population in a manner that is both real and dignified in its humility and strength.

Washington said HTV is a major platform for this gallery. “The reason to come here was to a create a platform not just for myself, but to give the community a better perspective on a number of things, one of which was to be able to understand the art and appreciate how it works in the community,” he said. 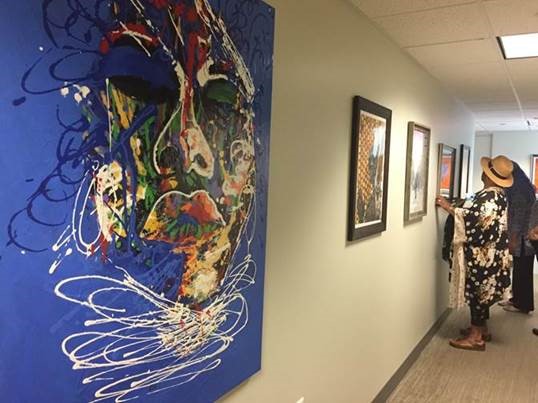 Washington said he wanted Houston City Council members to be aware of the exhibit inside their own building, as well as to raise the artists’ own awareness of who represents them.

“The first question I normally ask an artist is, ‘who is your council member?’ and 99% of the time they don’t know. To me, to be able to have value in the community, the artist really needs to be in contact with their council member,” Washington said.

“When you’re talking about doing something in the community, the council member should have priority to say, ‘That’s my artist; he’s in my area,’ and the artist should be able to go to the council member and say, ‘I need help. How can we help the community?’ There are other locations where we’ve created a platform, but to me, this is the nucleus of it,” Washington said.

According to Irving, the exhibition further demonstrates the relationship between art and politics.

“This combined effort dually showcases our citizens in action within the art space. Government is of the people, for the people, as well as art,” he said.

Washington said the artists represented at the gallery were specifically chosen for this exhibition. Evans was originally slated to showcase his photography at Photofest in 2020, but the plans were derailed by COVID-19.

Evans’ collection “Visibly Invisible” is a series of photographs highlighting Houston’s homeless population. The people are photographed in different positions that the public takes for granted, he said.

“People just walk by and ignore them,” he explains. “You look at them and you keep it moving.”

Evans said having the gallery at City Hall has reminded him that all cities must figure out how to do more to address the issue of homelessness. 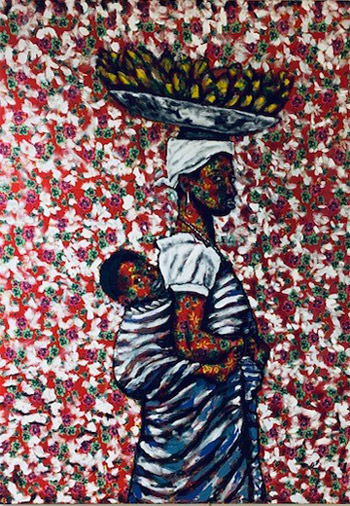 “Some may say they got into their situations on their own. I don’t know, but whatever the case, they’re there and we don’t really pay attention to them. To me, I was glad to be able show the public how people are trying to survive, even if it’s barely doing so,” he said.

While Evan’s work is more focused on the gritty realities of urban life, Queen Cora’s work reveals a more esoteric aesthetic. Known primarily through her work as a musician who has performed as a drummer with musical legends Prince and Beyonce, Queen Cora contributed four pieces to the gallery that also introduce her as a visual artist of great promise.

“The first piece I did with Charles encouraging me to display my artwork is called “Sensei,” in which he is my sensei through this ‘Konnect’ exhibition,” she explained. “It’s a tribute to the nurturing and development Charles provided.”

“We’re more alike than what we would allow ourselves to be different. It’s just about the perspective of the viewer,” she said.

Deniz Lopez, brand consultant and social media coordinator for the Harambee Art Gallery, said getting to see what the public’s reaction to “Konnect” was eye opening.

“All of the pieces show a part of humanity where you have to stop and be like, ‘I get it,’” she said. “The way all of these artists are interconnected, the way someone who’s walking through the exhibit would experience it, I see how we’re all so multi-dimensional.”