Yoga postures that flex the spine beyond its limits may raise the risk of compression fractures in people with thinning bones, according to research from Mayo Clinic.

The study examined injuries in people with osteo-porosis and osteopenia — conditions characterized by low bone density. Osteoporosis is a disease in which bones become thinner and more porous from loss of mineral content.

Bone loss that has not reached the stage of an osteoporosis diagnosis is called osteopenia.

Researchers reviewed the health records of 89 people — mostly women — referred to Mayo Clinic from 2006 to 2018 for pain they attributed to their yoga practice. Some were new to yoga. Others had practiced for years.

They had pain in the back, neck, shoulder, hip, knee or a combination.

Patients identified 12 poses they said caused or aggravated their symptoms. The most common postures involved extreme flexing or extending of the spine.

“Yoga has many benefits. It improves balance, flexibility, strength and is a good social activity,” said Dr. Mehrsheed Sinaki, a Mayo Clinic physical medicine and rehab specialist and the study’s senior author.

“But if you have osteoporosis or osteopenia, you should modify the postures to accommodate your condition.”

New research aimed at highlighting the potential of new technologies to diagnose disease has suggested that virtual reality may play a crucial role in monitoring Alzheimer’s disease.

Dementia is a general term to describe the impairment of cognitive functions such as memory, thinking, and communication.

The cognitive decline associated with dementia is progressive; people may go through stages of dementia, from mild cognitive impairment to more severe forms, including Alzheimer’s disease.

Not everyone who experiences MCI, which can result from anxiety or normal aging, will develop Alzheimer’s.

A new study from Cambridge University in the United Kingdom — the results of which now appear in the journal Brain — shows that virtual reality (VR) may be more accurate than standard tests.

Researchers gave subjects with MCI and others without it VR headsets and asked them to walk in a simulated environment.

The study showed that people with MCI and positive cerebrospinal fluid markers performed worse than those with negative markers, leading researchers to conclude that VR navigation tests may be better at identifying early Alzheimer’s disease than current methods. 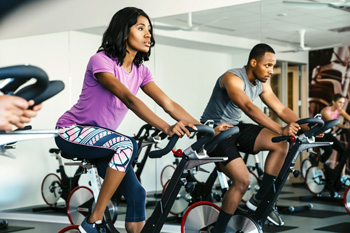 Regular exercise is known to be good for you, but it’s one of the hardest habits to commit to. There is hope, though. Some simple tactics and technics may be useful in keeping you on a fitness schedule:

ν  Sign up for a class. Then it’s scheduled, you’ve paid for it, and you may be more inclined to go.

ν  Set specific goals. With goals you’re more likely to carve out the time to achieve them.

ν  Track your progress. Seeing your progress — the number of steps you took yesterday, the amount of time you worked out this week — can make a big difference in how motivated you are to continue exercising.